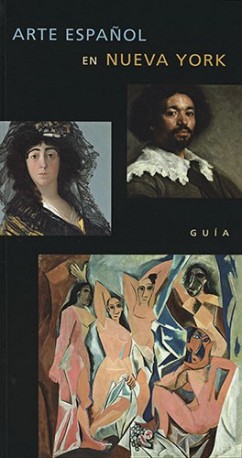 This book reveals the huge amount of works of art related to the history and Spanish culture existing in the city of New York. The objective of this study is not to elaborate an exhaustive catalog reasoned but, on the contrary, to study critically the Spanish legacy in New York. For this reason, and combining the practicality of a guide and the analytical sense of an essay, a book with three major sections has been conceived.

Secondly, a geographical tour has been made through the different museums of the city of New York highlighting the main works of Spanish artists present in them, following a geographical route that begins with the Hispanic Society, the only museum dedicated exclusively to art and Spanish culture in the city of New York. This second part, which occupies the bulk of the book, for the savvy connoisseur may not be surprising to find presences such as Velázquez, Goya, El Greco, Fortuny, Sorolla, Picasso, Miró or Tàpies in key museums, from the Metropolitan to the Museum of Modern Art (MoMA). But together with them, this book discovers presences perhaps less obvious, but equally revealing of the place that Spanish art has occupied in American collecting, and that allow us to follow the evolution of Spanish culture and history from the origins of history to the Currently, and through media as different as the so-called fine arts, the documents or the most varied craft objects, without leaving the city of New York. The helmet that the legend attributes to Boabdil, the last king of the Nasrid Granada, or a guitar that belonged to Andrés Segovia, both in the Metropolitan Museum, can serve as examples in this case. When Huntington created the Hispanic Society in 1904, it set out to make known the variety and grandeur of Spanish culture in New York. At present, it can be said that all the important cultural institutions of the city of New York have echoed their proposal.

Third, the book is completed with three thematic sections on architecture, paintings and sculptures by Spanish artists that, without being part of the museum funds, are present in public spaces in New York, contributing in a certain way to define their meaning.