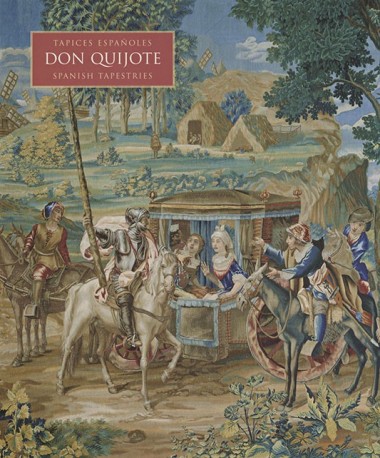 As Concha Herrero demonstrates in one of the essays that are included in this book, the importance of tapestries in the decoration of courtly celebrations assigned them since the 15th century a predominant place as official art; and, as essential elements of the most varied ceremonies and parties - triumphal entries, coronations, tournaments, royal weddings, etc. - enjoyed a leading role that lasted throughout the eighteenth century.

The nature of the tapestries made them easy to transport due to the flexibility of their fibers and the adaptability of their structure. Susceptible to different spatial combinations, they could indistinctly upholster interior or exterior spaces and create silk cameras or wall hangings. On the other hand, its use, no longer decorative or representative, but merely practical as a means of acclimatizing noble homes in the Modern Age, guaranteed its survival as a stable element in Western artistic production.

The use of the tapestry as a natural support for the representation of episodes of Don Quixote should not be related only to the extraordinary international predicament that the novel reached soon - which led to large representations of his scenes in a variety of media and through all kinds of techniques -, but with the own personal connection of the first Spanish bourbon with the figure of the Cervantino hero. The future Felipe V was occupied in his childhood, as part of his education, in serious readings, analysis and translation of the masterpiece of Cervantes.

Don Quixote, like Alexander, contributed to the young prince some facets of the ideal educational model on which the course of his instruction was based. Already as king, the brilliant cultural policy developed by Philip V made it possible for real manufactures to acquire considerable momentum, in the context of which the various eighteenth-century representations of Quixote iconography on tapìz can be placed. With the superb collection of cloths that treasure the National Heritage collections, an exhibition was held in 2005 and 2006 at the Meadows Museum in Dallas and at the Santa Cruz de Toledo Museum, of which this book, edited jointly by the State Society for Foreign Cultural Action and Editions El Viso, is the catalog. On the occasion of this publication, met essays of notable international specialists that address various aspects related to this artistic group: the iconographic fortune of Don Quixote, its importance in the education of Felipe V, the cultural policy of the monarch, the presence of Quixote in the Tapestry of the Enlightenment, the Royal Tapestry Factory of Madrid, etc., in a volume of bilingual edition that has revealed itself as an essential bibliographical reference for the study of Spanish 18th century tapestry and culture.