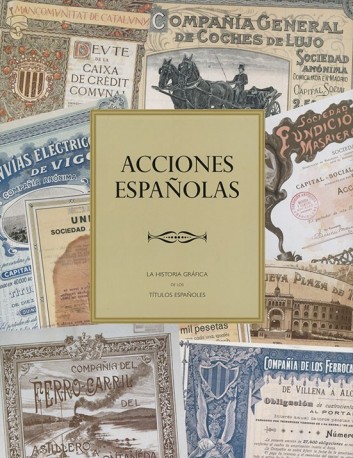 The first companies by shares or joint stock companies date back to less than the fifteenth century, when they were established in Italy and Germany underway in banking, navigation and mining.

The first Spanish stock exchange, in Madrid, did not open its doors until 1831, and even then almost all of the securities contracted were State securities, although by then the societies for colonial trade had already been developed.

The great apogee came from 1855, with the construction of the railroad and the creation of new banks, and the growth has been practically uninterrupted. This publication reproduces the collection of securities of the Madrid Stock Exchange, dated between 1729 and 1901, through which the process of economic modernization in Spain can be followed.

They leave record of activities that not only exist numerous businesses but also technological progress and changes in the ways of life: the navigation, the train, the streetcar, the automobile, the electricity ... But, in addition, they are invaluable examples of intaglio engraving and of graphic design, which is why the inalterable aesthetic values ​​are added to their documentary importance and you can see in them the influence of the evolution of the arts and decorative forms in each period.