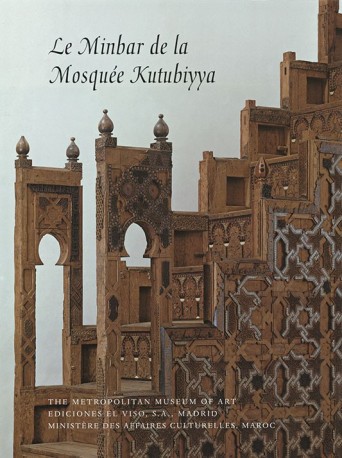 The construction of the almimbar of the Kutubiyya mosque of Marraquech, one of the best examples of the work of the craftsmen of the Muslim world, began around 1137 in Cordoba, the Andalusian center of arts and letters at that time. This raised seat intended to lead the Friday prayer was commissioned by the first Almoravid Sultan, Ali Ibn Yusuf, for his mosque, which soon became famous throughout Western Islam, for its beauty and the perfection of its execution.

On the occasion of the exhibition Al-Andalus. The Islamic arts in Spain, the Metropolitan Museum of New York offered the Moroccan Ministry of Foreign Affairs its restoration technicians to, in collaboration with the Moroccan technicians, restore this work. Once finished, this book was published, the first one entirely dedicated to analyzing the structure of the mimbar, its history, and its meaning, with the discoveries made at the time of the restoration.

The authors, a historian and conservator of Islamic art of the Metropolitan Museum, a curator of the Bibliothèque Générale de Rabat, four restorers of both countries and a Moroccan architect of Islamic historical monuments, make an exhaustive analysis of its structure and materials, of its decoration and state of preservation, as well as an exploration of its artistic and historical significance within the Islamic world, studying the origin of almimbares since the time of Muhammad, and comparing them with other important examples of the Muslim world.

The photographs taken by photographers of the Metropolitan Museum, before, during and after the restoration process, as well as a series of explanatory drawings help the reader to admire and understand this piece of furniture in all its complexity.